Searching for Plans to build an Ark

Well, this has been an unusual season in Polis so far. The rain has continued to fall, and at times it has been very heavy. Last night we drove out to Fly Again for dinner. I was worried as we headed out because it was cloudy and it looked like it was raining off in the distance. Fortunately, we managed to catch a bit of the sunset when there was a break in the clouds and the sun peeked through. The pizza was good, and our waiter was from California so we had a long conversation with him since we were the first Americans he had seen in Cyprus. Then we noticed some lightning and heard some thunder, and then it poured. Fortunately, even though 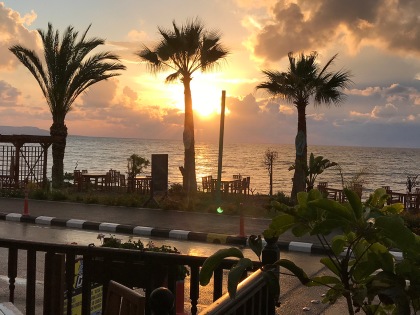 we were outside, we were under an awning and the wind was blowing the rain in such a way that we did not get wet…or too wet. While I had my jacket, I was almost at the point of regretting not wearing long sleeves underneath it, since it was a bit cool and windy. Our waiter suggested hot tea which was a good idea, but sitting outside in the rain wearing a jacket sipping hot tea in Cyprus in late May was a bit surreal. Then, it rained off and on all night – and was heavy at times. With the rain hitting the building, it sounded a lot like being in Indiana, PA at this time of the year where it rains a lot….a lot, like almost every day.

This entry was posted in Cyprus, Food and Drink, Polis, Weather. Bookmark the permalink.