So, after a lengthy travel day of Pittsburgh to Toronto to Athens to Larnaca, I arrived in Cyprus on Monday. I really did not do much other than check into a hotel and wait for Bill to arrive. Once he arrived, he and Sarah (an IUP graduate student in Anthropology who will be using the portable XRF on Late Roman fine ware sherds at Polis and PKAP), went down to the waterfront and had a dinner and then walked around a bit to see how much, if any, Larnaca had changed since last year. It really had not changed much, one building had been torn down and a few businesses had changed ownership, but other than that it looked pretty much the same.

This morning, we got up early and went and visited the staff at the Larnaca District Archaeological Musuem  to let them know (warn?) that we would be back next Monday 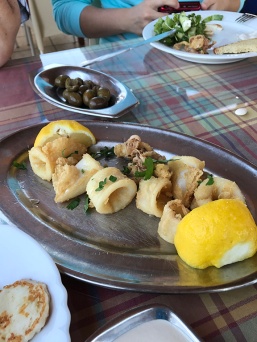 to start working with our PKAP material. We next ran a few errands (Bill needed a simm card and I needed some graph paper for drawing) and then we went out and picked up our rental car. It did take us a few minutes to cram in all of our luggage and still have room for all three of us in the car at the same time. By the time we hit Papho sit was 12:30 and so we decided to stop for some lunch and since we were so close to Ayios Georgios Pegeia that we should head out to it and have a nice lunch at the St. George Fish Tavern which over looks the harbor and has really good grilled octopus. since we talked about Cypriot things, this was like a working lunch in many aspects. 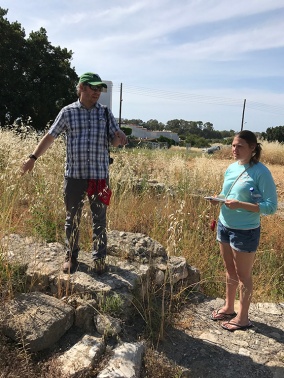 After lunch we headed on to Polis. When we arrived we first stopped at the apotheke and visited with Amy Papalexandrou (who had arrived with 4 students yesterday) and made some plans for the week. Then we went and checked in at our hotel (Renos Tourist Apartments), and made a grocery run to get water and breakfast items. Finally, we took a tour of the site so Sarah could see what it looked like. Unfortunately, EF1 was really overgrown with head high grass. Bill was kind enough to give Sarah a quick overview of the site based on our research. Though..this came at the cost of Bill’s humor – for example he made the dating the church/dating the walls joke 5 times. Anyway, we will be heading out to dinner with the goal of starting work bright early tomorrow morning.