As I was sitting in the Pittsburgh airport on Sunday afternoon, I realized that this was my 17th summer trip to Cyprus, which makes me very old evidently. The reason I was thinking about this was because my Pittsburgh to Paris flight was delayed as they changed a malfunctioning part. I have had this happen before, but never where the mechanic has the part out and lying on the tarmac as he works on it in front of a huge window that allows the passengers to watch him work. He has a screwdriver and a part that looked like a toaster oven. I couldn’t bear to watch, since I would have totally flipped out if he broke the screwdriver, or got up and kicked the part around a little – all things I do when I am working on something. If I saw him do that, I would never have been able to board the plane, particularly since they had to run the engines for a while after he finished the repair to make sure it worked – must have been an important part. 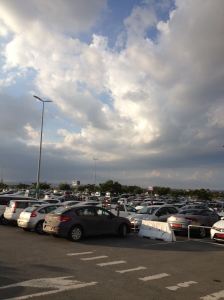 Anyway, 2 takeoffs, 2 landings, 2 books, 2 movies, and 2 bad meals later I was touching down in Cyprus. It went great at first, the flight was early, there was nobody in line at passport control, my bag was the first one out on the baggage carousel, and the guy at the car rental remembered me and zipped through the paperwork. From touching down to putting luggage in car – 30 minutes. As I walked out of the terminal, I braced myself for the blinding sun and warm temperatures that I associate with Cyprus, but it looked like I was still in Indiana, PA – it was cool, the wind was blowing, and there were gray clouds in the sky. 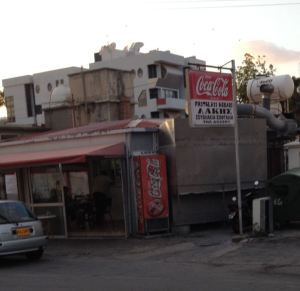 Once in Larnaka, I decided to grab a bite to eat since I was starved after the airline meals – one was a rice dish, which was super hard to eat with the tiny plastic utensils you get, and just not very good. I figured I needed a first class kebab and so I went to the place I frequent next to the Larnaka Museum, whose sign points out that they serve First Class Kebabs. When we work at the main museum in Larnaka, you can smell them preparing the food there during the morning hours if the wind is blowing just right and they are always packed at lunchtime, mainly because they serve the best pork souvlaki in Larnaka, in my opinion. It was fantastic.

After dinner I checked into the hotel and got the same guy who has checked me in to the hotel for the last two years, and for some reason he insisted on acting like I had never been to Larnaka before and spent a great deal of time explaining where the beach is, where the shopping is, how to insert the room key in the lock and in the power box in the room, etc. Made me want to scream. Anyway, I am now basically killing time until I go to pick up Brandon at the airport at 10:10. The big decision, do I go early and see if I can find a vanilla covered doughnut or wait for breakfast? Cyprus is famous for their vanilla covered doughnuts, much better than what I can get in the US.

This entry was posted in Cyprus, Food and Drink, Weather. Bookmark the permalink.