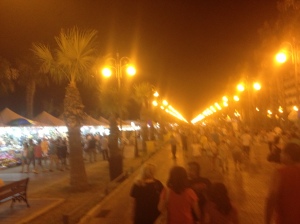 So, on Wednesday we returned to Larnaka to take care of a few things – like making copies of data sheets and swapping data. That night we went out for a last dinner and then took a walk along the boardwalk to enjoy Cataclysmos or Kataklysmos – a water festival. The original festival might have been tied to Aphrodite or Deucalion, but eventually came to celebrate Noah’s flood. To make it even more confusing, its date of celebration is now tied to Pentecost. Towns throughout Cyprus celebrate this festival with a few days of games, throwing water on people, music, and food. In Larnaka, however, it seems to last for several weeks. On the boardwalk numerous booths are set up for games of chance (or perhaps the more appropriate name would be games of no chance) and the selling of an assortment of strange items – stuffed animals, toys, balloons, cds, alcohol, strange foods, and clothing. There are also rides, the best of which in my opinion is the bumper cars – which are faster and less padded than American bumper cars. Even better, unlike bumper cars in the States which have to be driven in only one direction and head-on collisions are not allowed – the Cypriot ones are basically a free-for-all where you can drive in any direction and head-on collisions are common. What I like best about Kataklysmos is the loukoumades – which are fried dough balls soaked in honey or a sugar syrup. All along the boardwalk there are many different tents set up for people to sit and enjoy their loukoumades while watching the crowds stroll by. My main problem is making sure that I do not eat too many. My first visit to ancient Corinth included a bad experience of eating way too many loukoumades, feeling very ill all night, and lying on the bathroom floor feeling like I was going to die. As I lay there, I could hear the music from the village playing late into the night, and especially clear was one loud group that had a clarinet as  the featured instrument so it was wailing away up and down the scale. Since then I have been more careful in my loukoumades consumption. I will have to say that this year Kataklysmos looked smaller to me with fewer people in attendance, which might have been because it was a Wednesday night and not a weekend. 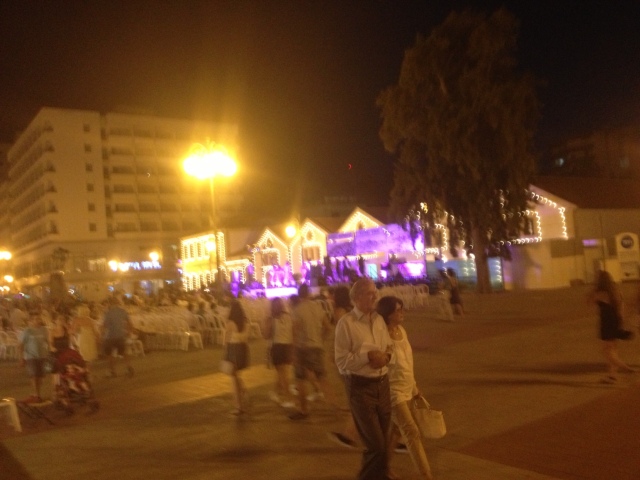 This entry was posted in Cyprus, Food and Drink. Bookmark the permalink.